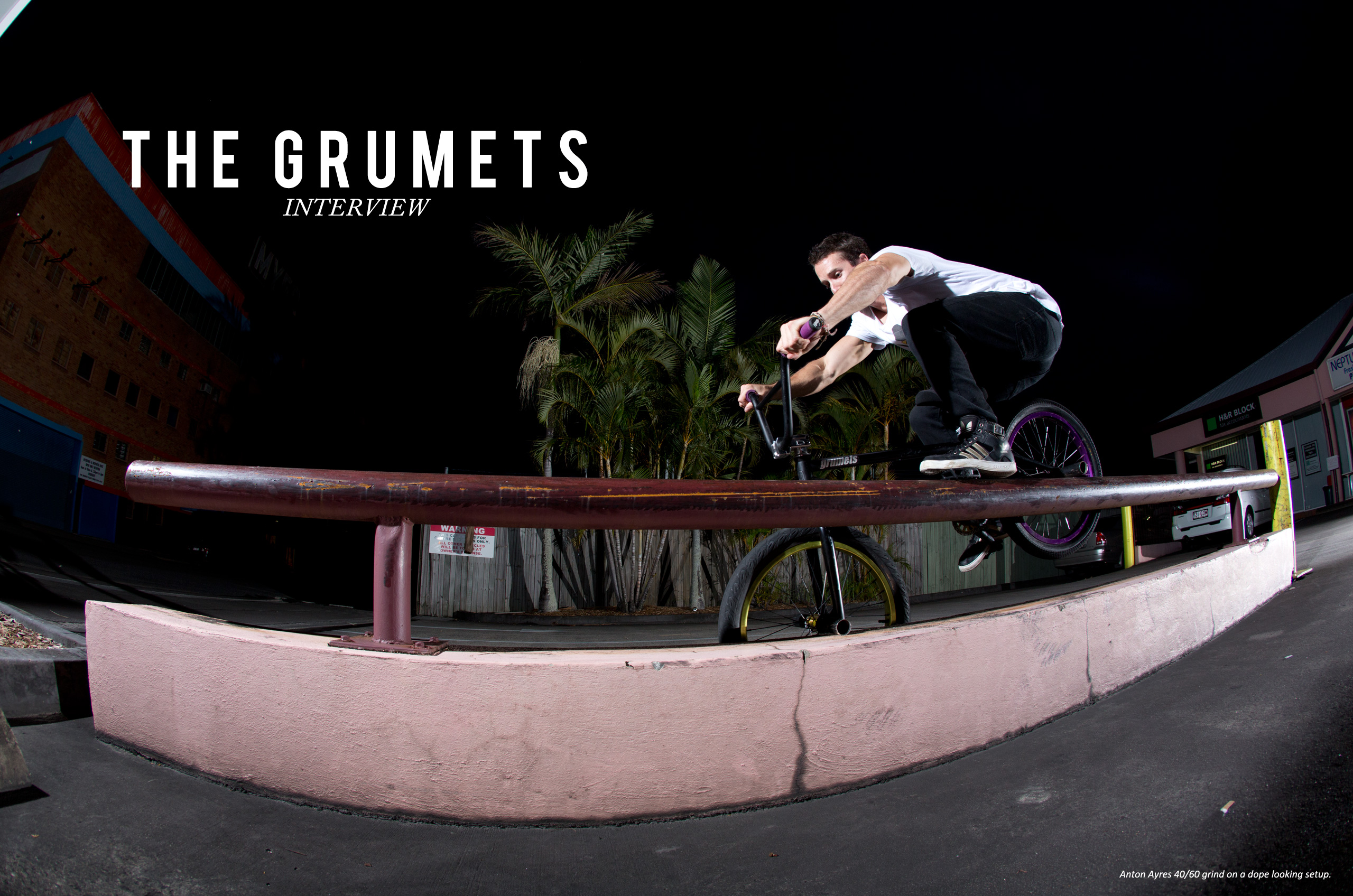 IT'S BEEN A MINUTE SINCE THE GRUMETS DVD CAME OUT, BUT WE WANTED TO CATCH UP WITH ANTON AYRES AND TALK ALL ABOUT HOW THE DVD CAME ABOUT AND GIVE YOU AN INSIGHT INTO A REALLY ENJOYABLE DVD COMING OUT OF BRISBANE.

How long was the filming process for the DVD?

It took about a year to film the movie.

Premiere’s for BMX dvd’s are always pretty crazy, how did the night go?

The prem night was awesome, there was a great turn out with lots of familiar and unfamiliar faces. I remember looking over and seeing Macca and Bongsy sculling bottles of red wine through a locked up wine rack I’m not really sure how that works and Macca maintained his reputation of being the drunk guy that breaks everything, I’m pretty sure he tackled a sign and Bongsy ended up getting kicked out before the movie even started.

What made you decide to post the sections online basically as soon as the dvd dropped?

Well when I made the dvd I was never planning to sell too many its too hard to distro them, so I basically just made the dvd for all the crew so we could have a prem night and be able to put the movie in the dvd player when we felt like having a watch, so I didn’t see why there needed to be any wait to put it online.

Who’s section was the hardest to film?

Dafles’s section was definitely the hardest to film cause he never came out riding.

Did you have any major problems during the editing/making the dvd  process?

The only problem’s I had were trying to slow-mo the clips because I filmed everything in 30fps it is not the best frame rate for editing with, then there was trying to convert HD to dvd if you don’t have anyone to help you it’s a very time consuming process, in the end I still didn’t get the quality I was after. 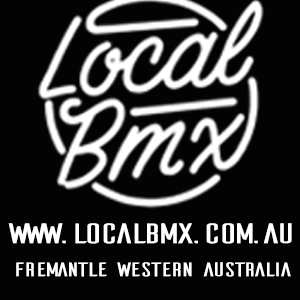 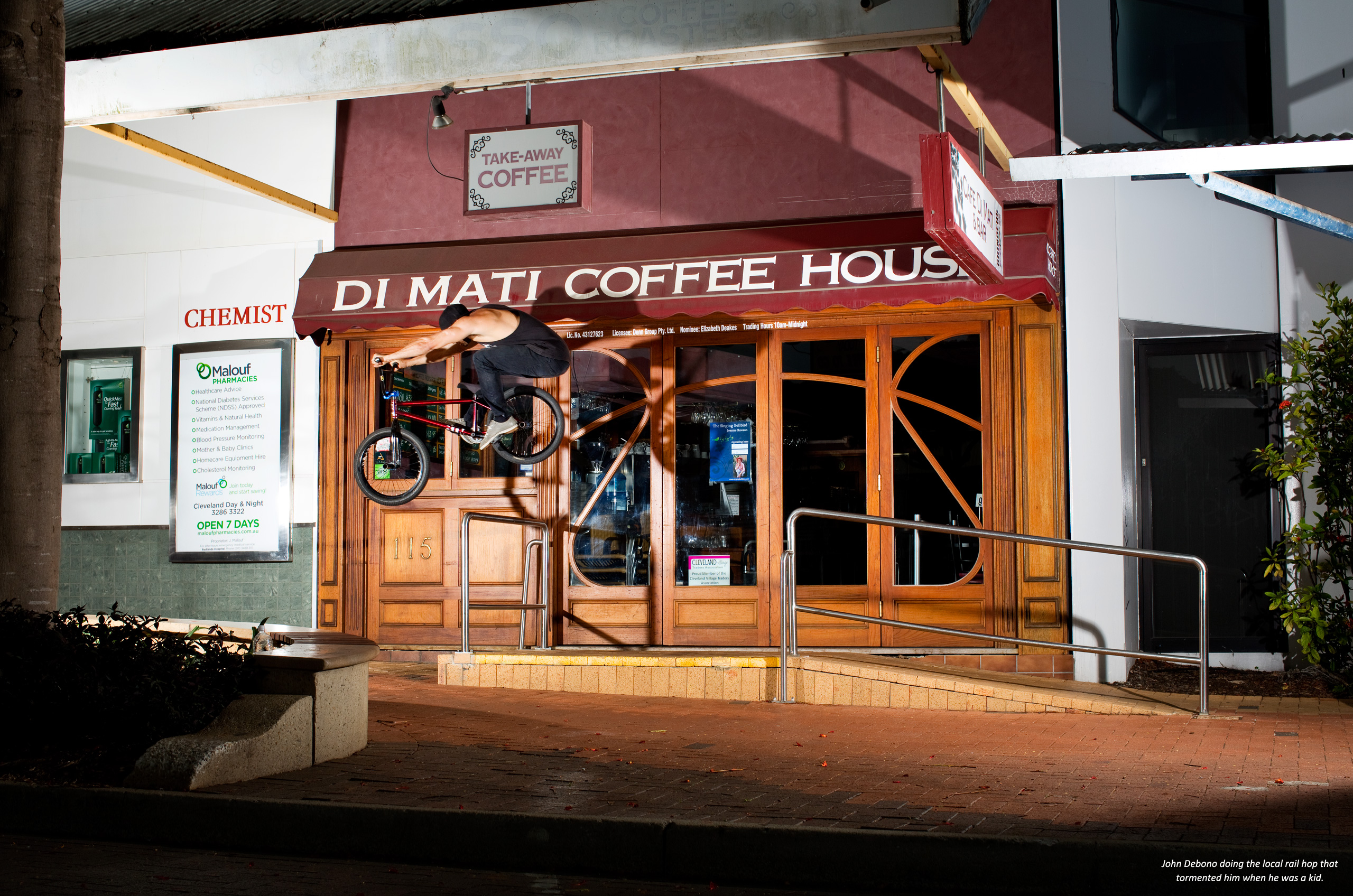 "Macca maintained his reputation of being the drunk guy that breaks everything,"

Tell me about technical side of the DVD – you shot it all on DSLR’s with a steadycam, is that correct? Why that combo?  Any other camera gear used…

I used the steady cam because I cant skate and film at all I really suck on a skateboard, and I love that I can run through bushes and stairs and the filming still comes out mint. so my setup was a Canon 7D, 60D, a steady cam and a tri-pod, It is basically the cheapest and lightest setup on the market that still gives high quality footage.

Given the current web climate of BMX, what do you think are the advantages of a DVD?

The advantages that you get from watching a dvd over watching a web vid is the relaxed couch vibe that you get when you are watching the movie, and I always forget the names of the web edits I like which really sucks but with my dvd’s I have them forever so I never forget my favourite sections in them.

The riding in the DVD is a pretty comprehensive look into the evolution of Brisbane street riding, from the OG drainkids, through to dudes like Raph, and now the new school burly-tech of Elkins. Was this a conscious decision or something that happened organically?

The evolution of street riding can be summed up in a lot of different way’s, it’s safe to say that there were not many conscious decision’s made through the making of this dvd, every rider in the Grumets dvd have been riding for over ten years including young tiny and Jake, some of them decided to follow the trends and the others just didn’t care about what the rest of the world was doing and just did their own thing. The only fella in the crew that I would consider new school would be Elkin’s because he has only been riding for a few years now unlike the rest of the crew.

So Anton, you were one of the original street guys up north. Tell me a little about the Drainkids videos. How did they come together and what was the scene in Queensland like at the time? Where did you guys fit in?

So when I first heard about the Drainkids it was when I was in grade 7 and my neighbours who I used to ride dirt jumps with brought home the Drainkids video. I remember watching it and thinking this is the coolest thing I had ever seen! The vibes and riding were all about having fun and sending rails and dirt jumps, it didn’t take long after that before I got my parents video camera and started making little movies of my own, which I wish I still had copies of them back then all we did were flyouts and dirt jumps managed to make awesome movies out of them. Anyways overtime we all started getting big enough to bunnyhop our heavy bikes down rails and the Grumets saga began after a few years of rail sending most of the crew got there licenses and stopped riding which sucked I’m sure that this has happened to lot’s of people out there before. So not long after this our now mini Grumets crew started hanging with the Drainkids, which I’m very grateful for they taught me many things that have helped shape me into the person I am today. 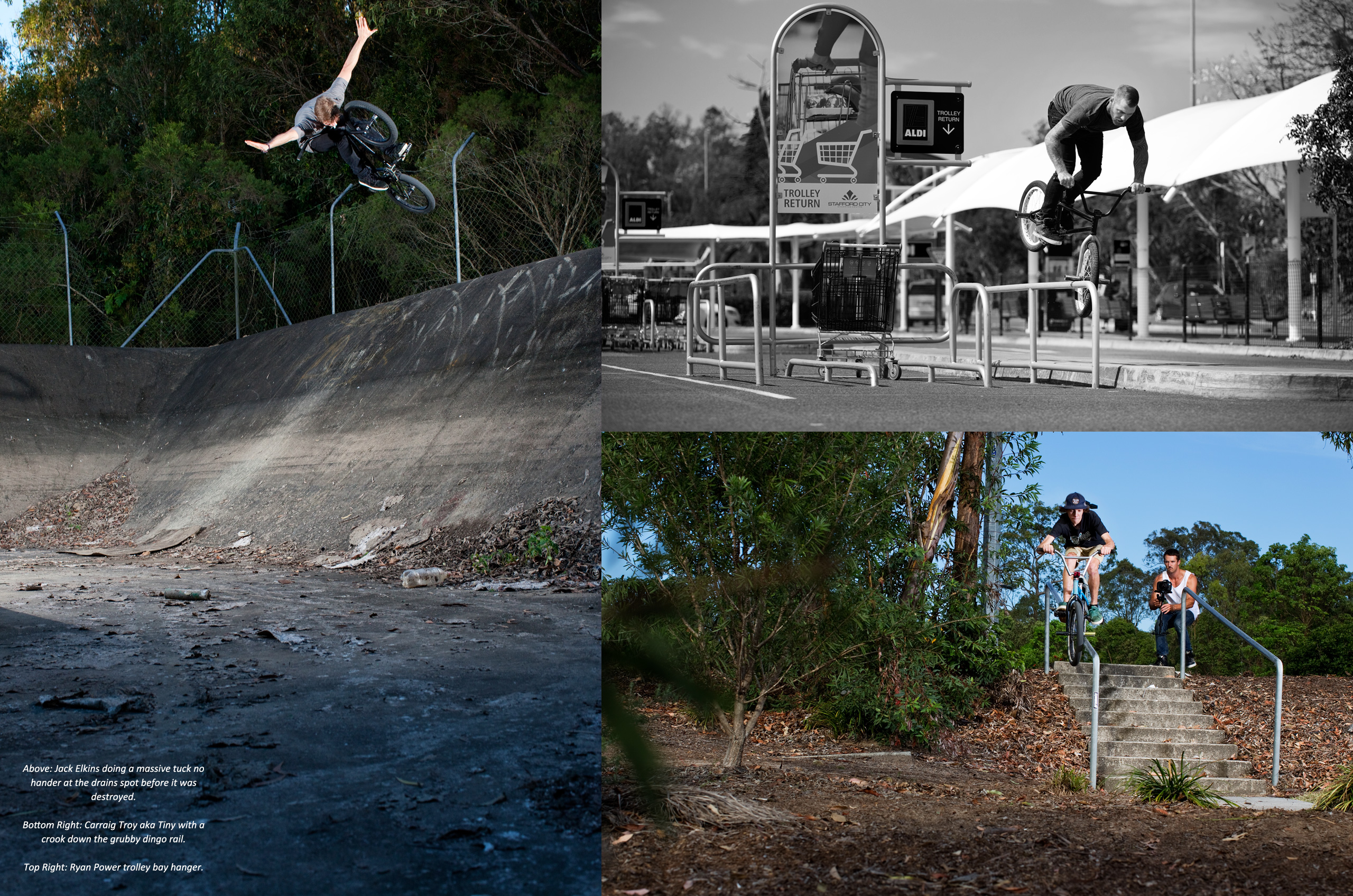 A little while before the Grumets video came out, the most recent Drainkids video was put online which received a lot of praise. Were you involved in that, or was it just coincidence?

it was definitely just a coincidence Elcee had been meaning to put the old Drainkids dvd online for years and he finally got around to doing it not long before the dvd dropped.

I vividly remember a Drainkids advertisement in one of the 2020 Hindsight DVD’s that has some pretty funny antics in it. From watching the crazy mud/food fight in the Grumets vid, it seems that a lot of those fun feeling vibes have seeped through?

Well I have an interesting little story to tell you about our mud fight intro for the Grumets dvd, it was actually a re-enactment of the intro of an old Drainkids video, so when I was making my vid I was like “yep I’m definitely gonna steel that idea, it looks like the most fun ever”.

It’s great to see that a lot of you guys are now getting the recognition you deserve. How do you feel about sponsorship situation now as opposed to 5+ years ago?

Well my sponsorship is with Division is great I still do the same stuff that I did before, there is no pressure to get clips or send myself or go in any competitions. I feel really lucky in that perspective, but it sucks that there is still so many hungry kids that ride really hard just to get a sponno and to impress everyone else. They need to chill out and do there own thing and do it for themselves, people should ride to have fun that’s what’s important to me. 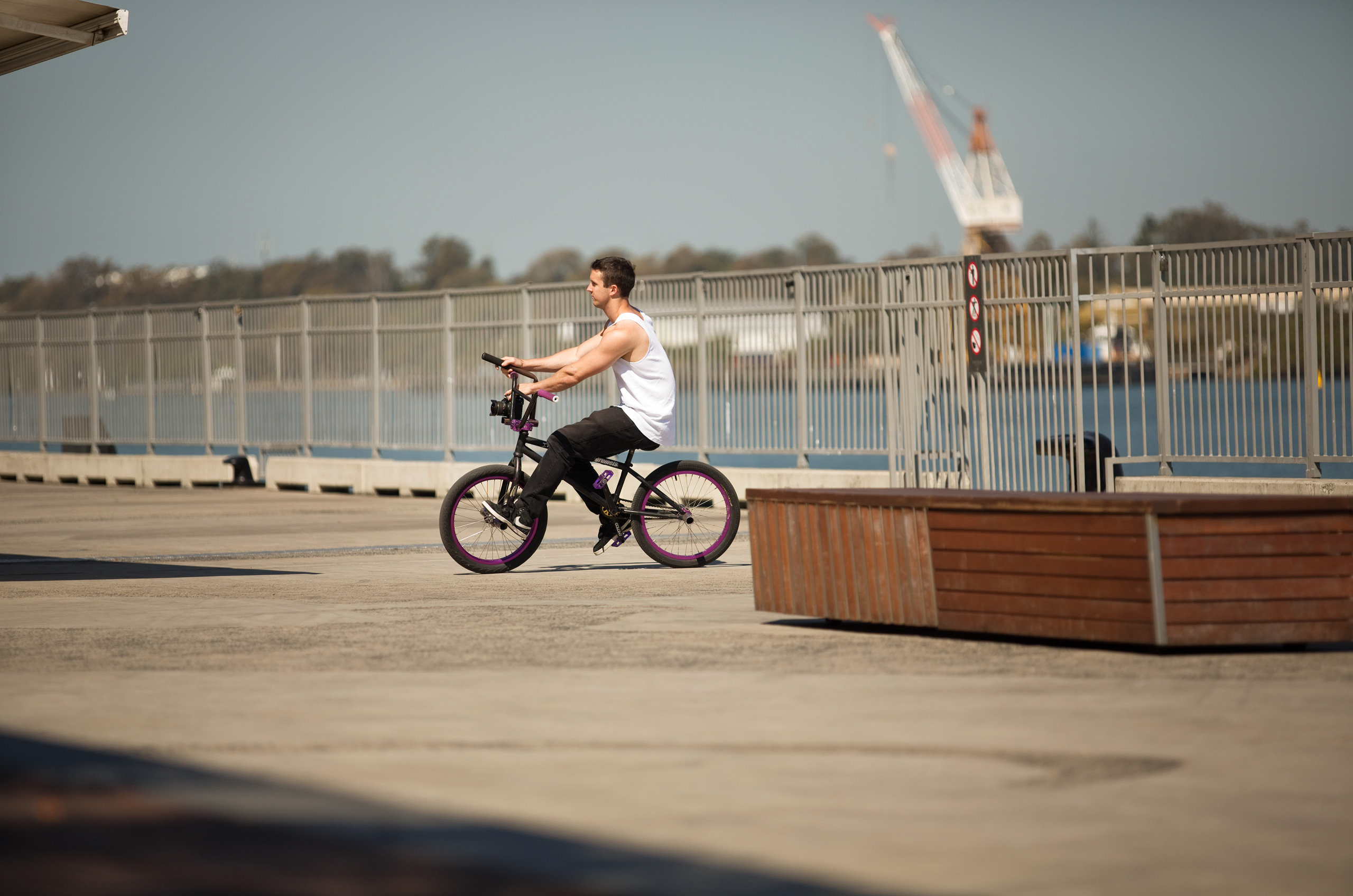 "They need to chill out and do there own thing and do it for themselves, people should ride to have fun that’s what’s important to me."

The Grumets DVD has a pretty diverse spectrum of riders in it. Do all you guys ride together often, or did you pull in a few strays that you thought deserved a video part too?

Well there were a few strays that pulled sections together for the vid half way through filming but not because they deserved sections but because they are good blokes and are fun to hang with. Since we finished filming the movie only about half of the fellas are still coming out riding on the weekend’s. it’s pretty dunga but they all have there reasons. Lately it’s just been me, Seeley, Raph, Tiny, Jake, Gonz, Steve and Macca but we have been hanging with the Birtles crew lately who are a pretty cool bunch of fellas.  Poor Luke is still out of action after a bad crash he had when filming for the Grumets and Ste had to move back to the UK which sucks too I miss riding with them too.

Besides the quality of riding, what I was really stoked on was the way the video was distributed. Having the hard copy DVD and the sections on Vimeo seemed like a really successful outcome. By having the sections online it meant that riders who would have otherwise been overlooked had they just put an edit online, had their sections paid attention to. It wasn’t only good for the unknown guys; it is much easier for someone to remember Grumets than an obscure web video title. How do you think it turned out? Were you happy with having it both online and as a DVD?

Yeah I’m absolutely stoked with how it all paned out I didn’t really think it through when I was uploading them day by day but it worked out pretty sweet, Another fluke that I have pulled over the years haha.

Watch all the DVD sections here. 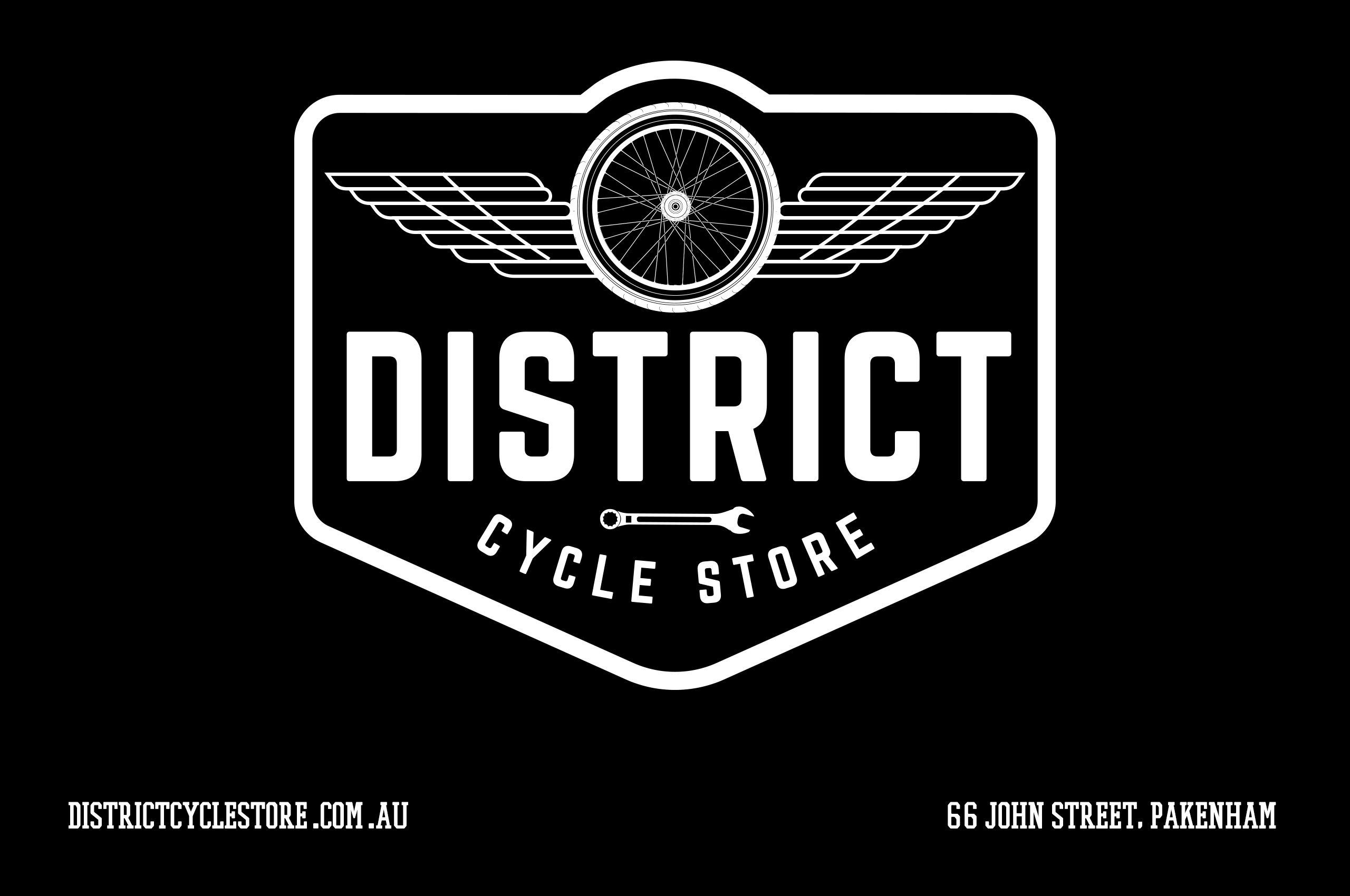