Yesterday, the craziest thing happened. We were leaving the motel in the morning putting our camera gear in the back of the van then we drive down the street for breakfast. As we get out of the car we look at each other and realise the boot to the van didn’t get shut, my camera bag was barely hanging in the back of the van and DJ’s was nowhere to be seen! DJ automatically runs up the street with myself behind him expecting to see the camera bag crushed in the middle of the road but somehow we got lucky and someone had picked the bag up and put it on the side of the road just near where we drove off from. I can’t believe our luck, not losing the gear for one and the un-captured footage also! DJ will never live this one down.

Photo below is from later in the day double team rail hop. 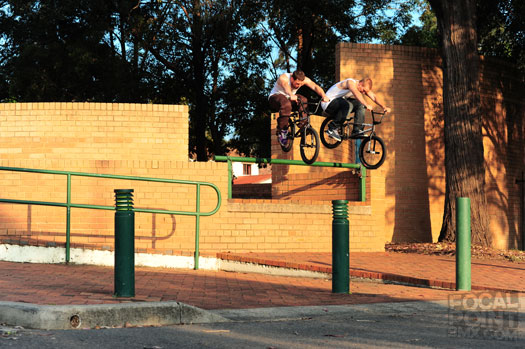 This entry was posted in BMX. Bookmark the permalink.